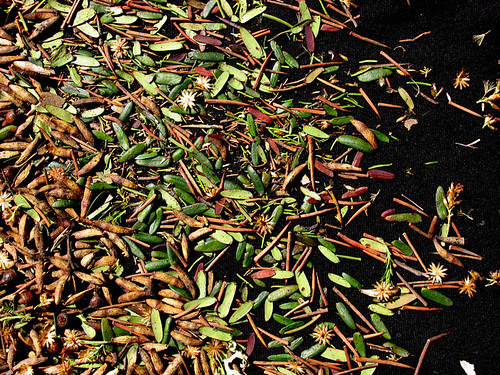 aside from figuring out how to build a house and harvest water and fence out marauding sheep and all that, I've been doing some press shots for Cicada's next work, litter, which Nick will be installing at the Govett Brewster Gallery in New Zealand for the show we're in there in May, New Nature...

litter is something that came out of last year's brainspace concerning pixelation and simulating the artificial by use of the organic and all that stuff which was whirling around my head in 2006. The work is, in short, a kind of leaf static - a visual white noise composed of many tiny organic elements, i.e. small leaves and seedpods and twigs - the idea being that from a distance the work is experienced as white noise/mushy static (both visual and aural), and as the piece is approached it clearly takes on a more organic form. Hopefully (and quite centrally), however, the piece will still display the same properties as you experience when you watch video static for too long - the mind seeks to make patterns out of chaos and you end up fascinated with the whorls and expanding shapes within the chaos - yr very own op art...

And Ben's sound should take the audience from the mundane to the intricately intimate with a soundworld which starts as white noise and ends up as, well, actually I haven't heard it yet, but perhaps something like what the forest floor might sound like if all the mulch and leaves were sentient...

The visual side of things will be created by stop-motion animation and a very large supply of small-sized organic materials, which I'll be gathering over the next few days in large quantities from the hills around milkwood, and up the back block in the conservation area. I would like to be able to include the latin names of all the organic components, but my knowledge does not yet extend that far. I still can't tell the difference between all (or any actually) of the eucalypts around here... or the grass... clearly the botanist in me is still yet to rise up.
Posted by the june fox at 6:34 PM