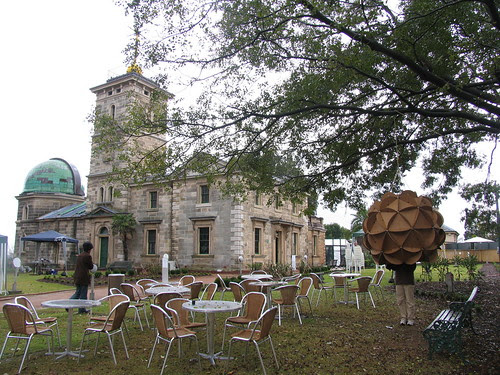 A chance to contemplate the night sky of 1858, from the comfort of a Solar-Powered Cardboard Planetarium... in the auspicious surrounds of the Sydney Observatory gardens, atop Observatory Hill. Bring a picnic. Bring your friends. And bring a kid, if you can find, borrow or hire one...

The Observatory grounds will be open from 10am-4pm each day of the June Long Weekend (7th-9th June 2008) and, in addition to the Solar-Powered Cardboard Planetarium, I believe you will be able to view the Sun through filtered telescopes set up on the grounds, see inside bits of the Observatory that you usually cannot, do other stuff and generally take in the gobsmacking view of Sydney harbor, while contemplating the firmament above from your picnic rug and intermittently toasting the universe.

** correction - due to rain being the enemy of cardboard, the Planetarium will now be on show during the Festival of the Stars in July, and thence after, for as long as it lasts **

- More on Solar-Powered Cardboard Planetaria: participatory sculture of the About, above project:

About, above is a project that considers the plausibility of making natural systems out of cardboard. Drawing on our enduring fascination with the night sky and the space beyond, About, above prods the viewer with gentle questions. The project explores ideas regarding our emotive reactions to natural systems, and investigate our relationship with natural pattern- recognition and our capacity for wonder, in the face of disbelief.
Full project overview
Posted by the june fox at 10:37 AM

Labels: about above, urban astronomy

We are the contractor since 1980 for alternations, renovations and extensions. On our website you find more information and you can request a quotation. aannemer, aannemersbedrijf, bouwbedrijf, verbouwen, renovatie, kosten uitbouw,kosten verbouwing
Thank for the Post.