MOB at Australian Centre for Photography 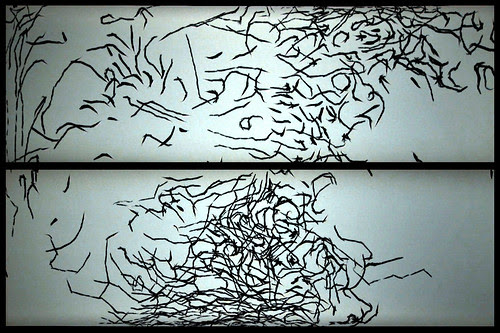 MOB - single screen view
4 channel video + surround sound
© Cicada 2006
The single-screen version of something I did with Ben Frost + Nick Ritar in 2006 is currently showing at ACP in Sydney. At the time of making we described MOB as:

Moving through and drawing from studies concerned with organic motion... the swarming tendencies of various species (humans included)... viral + emergent behaviors... crowd theory... resonant intelligence within a swarm of many parts...

The work is experienced as an installation with four-channel projection and surround sound. A study of organic motion, swarming behaviors and sound, MOB creates an abstracted environment populated with individual organisms of motion and sound. Within this environment the audience experiences the unfolding of a textural world, which builds up to the point where individuality is neutered and an abstracted crowd organism is formed.
The source audio for this piece was recorded by Ben in a small Icelandic church - a childrens' choir singing "i am lost / you are lost / we are lost".

The source video was created from footage of 500 tiny fish swimming around a custom-made tank while being wrangled by us all with audio and light triggers. 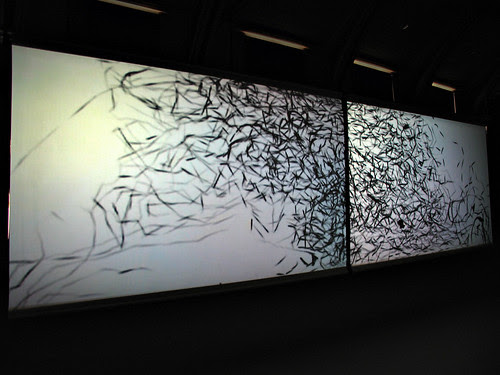 (Bobsleyter) invites you as a friend to see his Blogger - http://bobsleyter-pc.blogspot.com/