Life to chicken, death to vacuum 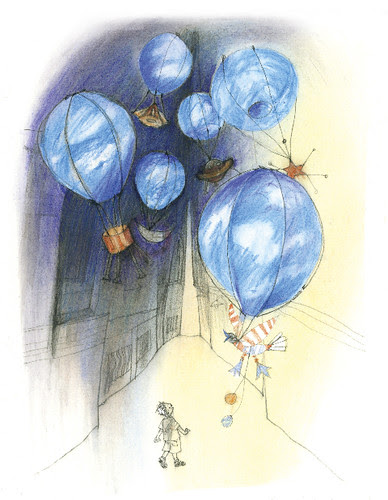 'The Sky is Falling' - artists impression by Helen McKosker ©2008
The City of Sydney is currently doing its very best to revitalize the city's laneways with artish type things. Derivative of Melbourne's 'Laneways Commissions'? Unashamedly! Good 'ol Sydney - not afraid to say 'hey that works good - we want that too'... path of least resistance and all that - I'm all for it.
So City of Sydney put out this thing called 'By George' which was, cunningly, a plow to get Artist Run Initiatives in Sydney to think up projects for the laneways running off George St. And among the fine folk who got a commission was Reef Knot , a loose conglomeration of folks who used to run the Knot Gallery in Hibernian House and continue to put together quite amazing tho frequently poorly documented projects for galleries, councils, festivals and the like on the eastern seaboard (note my lack of links to examples of their fine work).

So, in short, having been gathered together by Reef Knot, a bunch of us are making things for an unwieldy yet wonderful installation slated to go in Angel Place. Entitled 'The Sky is Falling', it is a sorta magical place where the heavens are descending and all matter of stuff is falling out of the sky... but in a non-theatening, childlike, strictly NON-Armageddon type way... yeah? got it? Its going to be beeeyoutiful. Lots of things + sounds suspended from hot-air balloons with sky painted on them. Opening start of October and up for 4 months or so, I believe.

During a slightly tipsy conversation with Michelle McKosker from the Reef Knot core I was trying to figure out what would fall from the sky, so to speak, if I was thinking like a 5 year old. My choices were 1) space, and 2) chicken little.

Chicken Little, you may recall from the picture book, ran around telling everyone the sky was falling, when infact he had been the victim of a gravity-fed acorn assault, until his mummy explained what was what. Somehow 'don't shoot the messenger' got in there and I ended up proposing a (comical, non-threatening) dead Chicken Little, shot through with an arrow...

The whole representation of the vacuum of space was a bit harder, but eventually I sorted it out. A vacuum... with... stars on it... 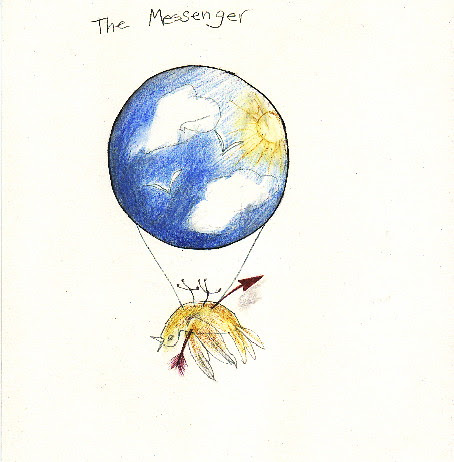 So The Messenger shouldn't be a problem - I got some advice from my crafty sister-inlaw, and she showed me the way on idiot-proof chicken patterns (I am not much of a sewer - yet). The vacuum situation is more fraught... 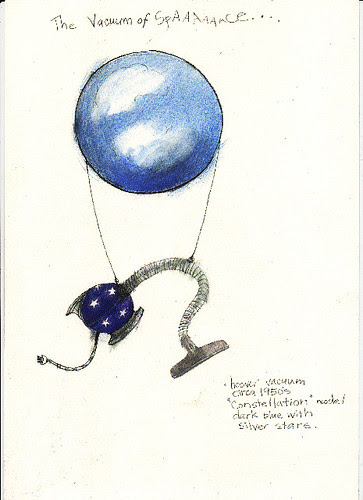 Over 10 years ago I inherited a (very) elderly vacuum that looked pretty much exactly like Marvin the Martian of Looney Tunes fame... turns out that this groovy model was produced in 1952 by Hoover, under the Constellation label. Due to its superior grooviness, Hoover have just re-issued it, actually, tho not in Australia...

Marvin (since he came into my keeping) has vacuumed his way thru 10 years of sharehouses, warehouses and venues, and still works, mostly. He would be perfect for the starring role as the Vacuum of Spaaaceee (said in a deep, prophetic voice), but this would involve removing his guts, and rendering him ornamental... is it worth it? I am still trying to decide...
Posted by the june fox at 6:04 PM

We are the contractor since 1980 for alternations, renovations and extensions. On our website you find more information and you can request a quotation. aannemer, aannemersbedrijf, bouwbedrijf, verbouwen, renovatie, kosten uitbouw,kosten verbouwing
Thank for the Post.